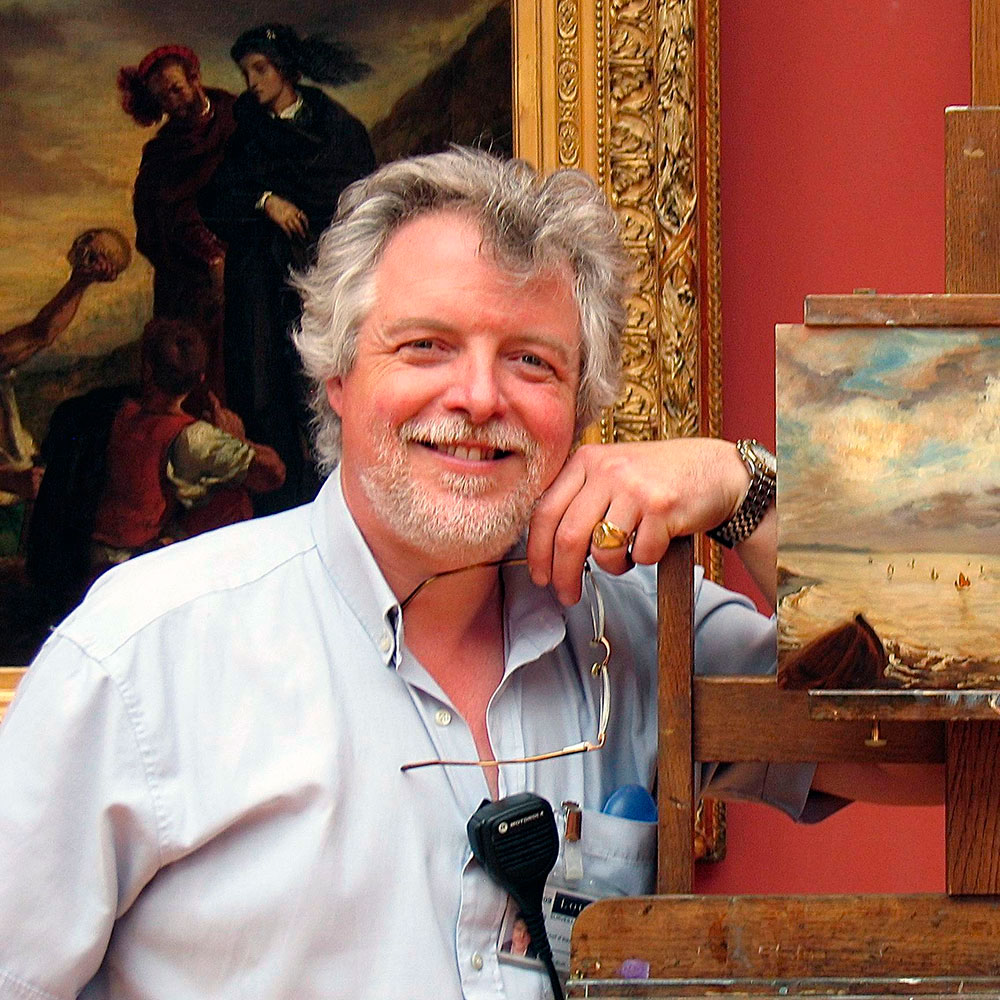 Gilles Malezieux was born outside of Paris France in 1956 with art running through his veins. On his mother’s side, both grandparents were hairdressers, and on his father’s side, his grandmother was a seamstress and his grandfather loved photography and oil painting. His grandfather taught Gilles the appreciation of painting at a very young age. In fact, Gilles still uses the paint box that his grandfather made by hand.

Gilles was destined to continue the family business of four generations as a hairdresser and started his apprenticeship at 13 years old. He practiced this career for 18 years in a hair salon in Paris. To receive a diploma in hairdressing, it was required to take 6 hours of drawing a week as well as sculpting. His art teacher was passionate about art which in turn piqued the interest in Gilles to learn how to paint.

Growing up in the Paris area, Gilles was exposed at a young age to paintings and sculptures in a private collection that was owned by friends of his parents. They owned a cafe in the Montparnasse area of Paris where it was common in the 1950’s and 1960’s for artists to give paintings and sculptures in exchange for meals. Over the years, the family built quite a large collection of artwork. As a boy, Gilles would admire their private collection two or three times a week: at the same time, the owners of the cafe would teach Gilles their favorite recipes. His mother also taught him how to cook, so Gilles discovered yet another form of art.

Gilles painted regularly, and sold his first painting at the young age of 14, and started to make reproductions of the Masters at 20 years old.

The hair salon where Gilles worked was in proximity of the famous “Ecole des Beaux-Arts of Paris”. It was there where he met painters and sculptures who invited him to their studios which then led to knowing wealthy clients who possessed an art collection of Dutch paintings from the 17th century. They also introduced him to the famous Drouot where they auction off paintings and other artifacts.

Thanks to these friends, Gilles eyes were opened up to the world of art and museums which he started to visit regularly. On his days off, he would spend hours at the Louvre studying each painting in the Dutch and Holland section, never thinking that one day he would actually be working there. Gilles started working at the Louvre in 1992, as manager of surveillance.

In 1995, Gilles started making authorized copies of the Masters at the Louvre. He has painted over 100 copies; his favorites being Dutch artists like Rembrandt, Pieter de Hooch, Gerard Dou, Franz Hals, and David Tenier.

Gilles, his American wife Angie Malezieux who is also an artist, and their three children moved to America in 2013. They presently reside in Houston, Texas. Gilles and Angie are establishing their art business creating customized art decor in homes, restaurants, and other establishments. Wall murals, faux wood, faux marble, and ceiling murals of clouds and angels with a European flair, are just a few examples of their artistic talents.

After 20 years at the Louvre, Gilles is now living his passion as a professional artist. As Gilles says, ”Painting for me is like breathing, it is vital for my well-being.”

Angie Malezieux, an artist who specializes in realistic oil painting, was born in Kansas City, Missouri and was raised mostly in Texas and Colorado. She has also lived in Florida, Ireland, Hawaii, and Paris, France with her French husband Gilles Malezieux, and their three children for 20 years. The family moved to the United States from France in 2013, and they presently reside in Houston, Texas.

As a child, drawing and painting were encouraged by her mother, who saved her works starting with a sketch of a telephone on a post-it at four years old. After winning several prize ribbons at the Texas State Fair, she then enrolled Angie for oil painting lessons at age eight. Throughout school, Angie developed her talent exploring many different mediums besides oil painting such as: watercolor, acrylic, charcoal, pen and ink, pencil, printmaking, wood block carving, stained glass, photography, ceramics, sewing, quilting, singing, piano, dance performance, theater, writing, languages, and video editing.

At first, Angie wanted to become a Walt Disney animator, National Geographic photographer, or a commercial artist. She decided to travel to see things more clearly; backpacking through Europe at 21 years old, living and working in Ireland as a seamstress, vacationing in Kenya, Africa to visit a high school friend, and making a mural pencil drawing of Swahili tribe members as a thank you gift for her stay. Since Angie was bitten by the travel bug, she started a career as a flight attendant at 23 years old. Based in Denver, Colorado, she enjoyed painting the Western life, then transferred to the Hawaii base where she was inspired by the Polynesian people, tropical flowers, beautiful oceans and sunsets. Angie studied full time for a Bachelor of Fine Arts degree at the University of Hawaii at Manoa from 1990-1995, at the same time flying a full time schedule to Los Angeles, New Zealand, Australia, Guam, Philippines, Tahiti,and Japan. When her airline closed the base in Hawaii, she switched from a painting degree to a French Literature degree through a study abroad program in Paris at the Sorbonne. This made it possible for Angie to finish her degree at UH and also keep her job as a flight attendant.

After graduating in 1995, Angie became qualified as a French Speaker based in Houston Texas, flying only the Houston-Paris route. Since she couldn’t finish her painting degree, she decided to stay in Paris to paint cobblestone scenes and authorized copies of the Masters at the Louvre and the Musee D’Orsay Impressionist museum. The idea was to live in Paris and commute for only two or three years, return to the States, get a Masters in Fine Arts, become a professor in painting at a University, and then retire as a flight attendant.

But God had a different plan for Angie’s life. He wanted her to marry Gilles Malezieux; a frenchman who was also an artist. They met painting at the Louvre where Gilles was a manager of surveillance at the museum. Angie and Gilles were both making authorized copies at the same time. There are usually 80-100 copiests at the Louvre throughout the year. It is a wonderful atmosphere where artists exchange ideas and improve their skills. Even though Angie didn’t finish her degree in painting, she says that the experience of 20 years making authorized copies of the Masters is far more valuable than any of the finest art schools in the world.

In 2006, Angie and Gilles were filmed together on the NBC Today Show. This featured episode was recorded at the Louvre highlighting the Malezieux's as they painted Authorized Copies of the Masters. When they were asked, “Where are all the copies you’ve both done?” Angie said, “At our house.” So NBC came and filmed them in their home and called their house "The Mini-Louvre".

Angie’s favorite subjects to paint are: portraits, tropical scenes with vibrant colors, and water reflections which inspire her to distort images like the wavy Paris street scenes. From 1996-1998, Angie participated in several exhibitions in the Paris area. One in particular granted her a prize medal for her wavy boulangerie Paris street scene. This wavy style which has become Angie’s signature piece is like looking through a funny mirror at an amusement park; taking you off into a whimsical world. 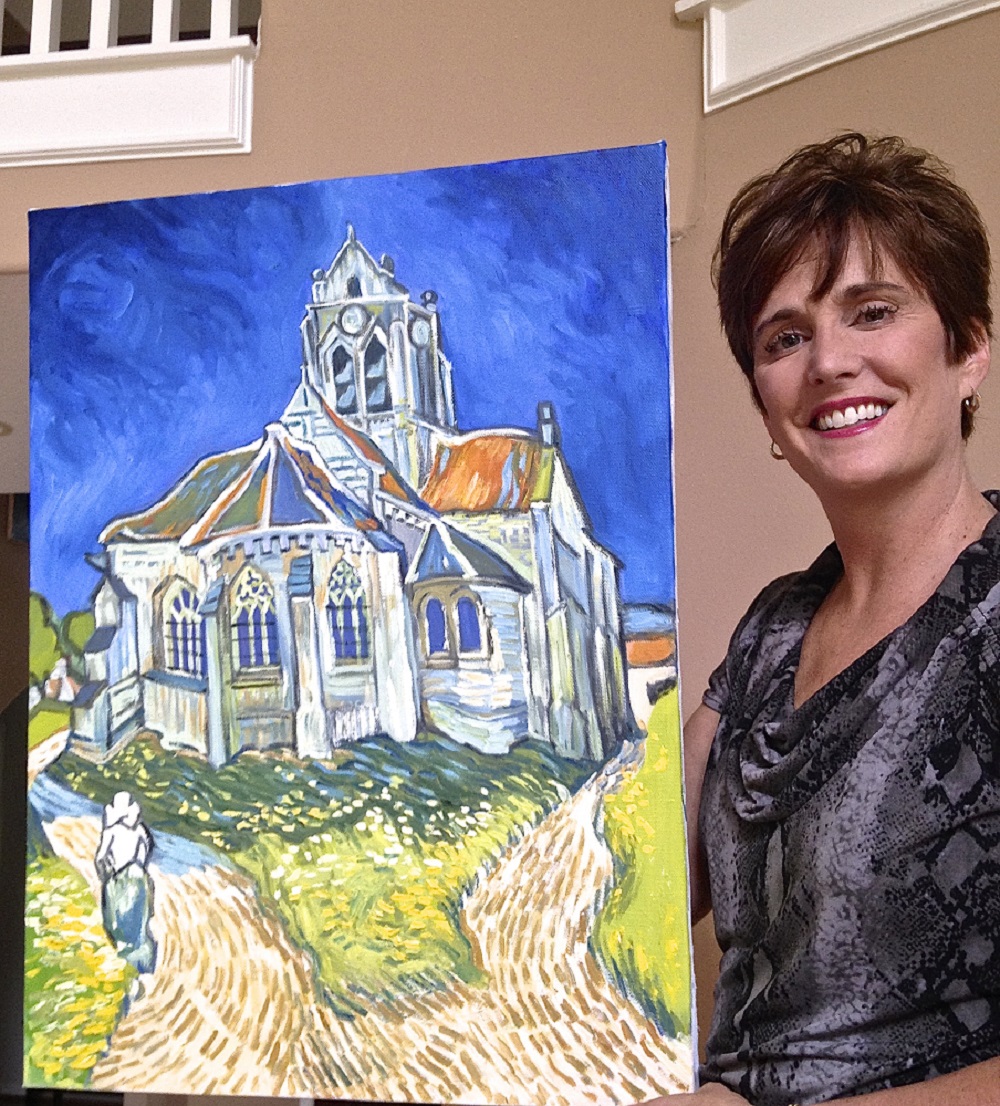